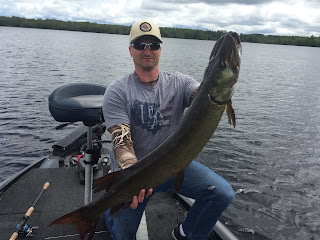 So I went to the Midwest Musky Expo at Pheasant Run this winter and I could not help but notice the size of the lures now available for the elusive Esox Masquinongy. Now these lures work on the predators for most of the summer and fall moreover, I don't think you could throw a bait too big either. Pounders, Super Top Raiders, and large jerkbaits such as Phantom Lures Hex at 12 inches are productive. I have however; used a technique for these fish in the summer and fall to even the late fall that does not include your traditional upsized gear. I use downsized lures to fool even the biggest fish in the system. In the following I will chronicle my observations that include downsizing not only in the early season, but at other times of the year as well.

Let us begin with the areas that I seek out as late spring turns into summer. I have noticed a shift as the spring turns to summer with the Musky leaving the deeper feeding areas for the shallow water back to the structure that they will remain on until late fall and into their wintering habitat. I look for large weed beds adjacent to deep water, rock piles also adjacent to deep water, and sunken islands. Other prime locations are the mouths and inlets from creeks and washes. These structures provide oxygenated water and baitfish use these areas to feed which bring in other larger fish that the Musky can feed on. All of these areas are prime summer Musky habitat due to the forage present and the cover that allows the big predators to ambush their prey. Here are some of these areas that I look for when seeking out a big Musky. 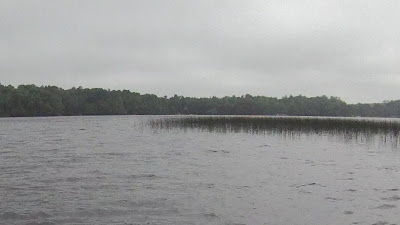 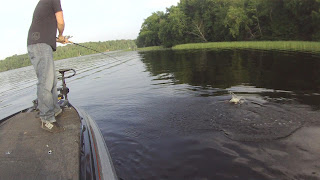 Shoreline weeds with access to deep water. The boat is in fifteen feet of water and the fish hit in two to three feet of water. 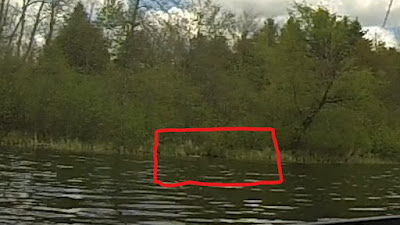 The red area is a creek mouth that runs into the lake. It is more noticeable when the water is a bit higher and it is flowing however; the water is always moving here and it is a prime location due to the various weeds present for cover.


Now that I have highlighted some of the areas that I look for we can talk meat and potatoes of the whole idea. I use smaller lures, some almost too light to cast on traditional Musky gear. My first lure is a Mepps or any other number five bucktail. They are easy to work high in the water column and can attract some large fish. The colors I use are a chartreuse, yellow, and orange as well as a simple black with an orange spinner. These two colors seem to attract the most action on any lake I frequent. These are the lures that can be a bit tricky to cast with a full on Musky outfit but with some practice there is no need to have multiple setups going. That can save some $$$$$ because Musky gear can get expensive quickly. The next type of lure is still an inline spinner but it is a seven inch tube style lure. These lures seem to get more strikes out on the end of the cast than any other I have used. I don't know quite what entices the fish but these little tube spinners get the job done. My favorite is the Rizzo Wizz and Rizzo Original in black with an orange blade. Other good lures which may not fall under the downsized category are small Bulldawgs and other smaller soft plastic jerkbaits. The smaller Bulldawg is still a larger lure but I have had great successes over rocks with these jerkbaits. I will normally position myself on the deep water side of the rock pile and cast on top of it. Then I retrieve back to the boat. I try to hit all angles because you never know where the fish is positioned on the rock pile. The last type of of lure I will go to is a smaller topwater lure. I like a regular Top Raider, small globe style bait, or any smaller topwater that still makes a bunch of noise. These lures can call up giants when a larger presentation won't even get a look. 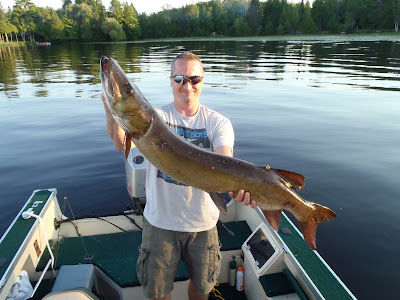 This fish was taken in a shallow weedbed leading into a bay that has access to deep water. She hit a seven inch Rizzo Wizz in black with an orange spinner.

I don't have pics of the lures however; please check out this link to my youtube channel. It has the lure I use as well as my rod and reel combos. I will also have a new review coming this season because I am featuring all new rods and reels for the year. This will take place when I can get on open water. Please stay tuned for that and check out this link for the featured lures and other equipment you will need when chasing these denisons of the deep. Here is the Musky setup video.

Posted by Unknown at 7:07 PM
Email ThisBlogThis!Share to TwitterShare to FacebookShare to Pinterest