I haven't been out in a while with the dogs because of so much time invested deer hunting this year and the weather being a bit out of the norm. The pheasant fields were flooded pretty heavily anyway and the last time out, we were having a difficult time with walking due to the deep water. We still did pretty good considering the dogs did most of the work.

This story begins with my birthday being on January 5 and I just did not want to go to work, so I called up the pheasant club, and they said the fields are more than huntable now and to come on out. I made a reservation and invited my cousin to come with so I had an extra gun. I had no idea what we would be in store for!

We got out to the club like many other times and said hi to the people working and putting the birds out and got ready to hunt. Jim, one of the gentlemen that works there said he saw a bunch of pheasants grouped up in the field we would be hunting and gave directions on where they were. I half listened and just kept getting ready to hunt. We were ready to go and proceeded to get the dogs out of the care and walk to the field.

We get into the field and my big male takes exactly one minute and thirty seconds to go on point! I flushed the bird and thought I made a good shot. Well the pheasant was running and as it turned out, he ran directly into a hawk that must have been doing a little pheasant hunting of his own. In the video you will see the rooster run across the road and then minutes later, we saw the hawk take off and the rooster was already being eaten. The hawk made quick work of that poor little pheasant. As we kept working down the field with the dogs we approached the end of the field and only saw that one bird. I was getting a bit disappointed because we were just told how many were bunched up in that field. We kept walking and working down the tree line on the far side of our field. Then about mid way down the fence line we could see the heads of about 25 pheasants running down the rows of sorghum. We followed close behind the dogs and they both went on point. We flushed the bird and got him, and then it happened. We turned as another bird took flight and there were about 50 pheasants in the air. I have never see a flock of pheasants like that in my life. This was really cool. The dogs of course went nuts tracking them and I could only imagine how much scent was out there for them to smell.


We continued working this field and the birds were going up four and five at a time. We were actually running out of shells as they would come up. This was a truly special day to be out in the woods with a good friend and my two dogs Tino and Roxy, who when I think about it are the real stars of the day. They consistently find birds in the field and sometimes it is amazing how they can find a downed bird so far from where we hit them. Without the dogs, we would not even have half the birds that we do. I am particulary luck with my two pointers because they can really get them going.

I am hoping I can get the video link up here because the file would not load to youtube like normal but I did get it into Facebook. So please check out my Facebook page Adventures Midwest and see the whole video!!!!! 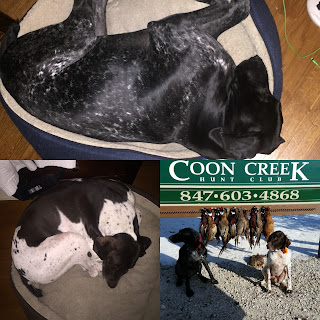 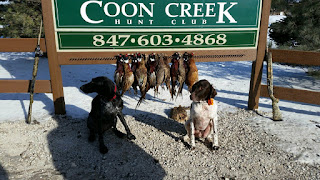 Thanks for reading! Hopefully I will get the video thing sorted out!!!!
Posted by Unknown at 9:32 PM
Email ThisBlogThis!Share to TwitterShare to FacebookShare to Pinterest