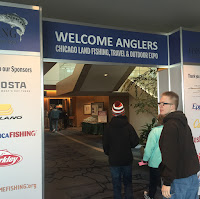 Went to the show out in Schaumburg today and was not expecting much to be honest after going to the show in Rosemont for the past few years. I did however, need a few things and wanted to meet some people that I have been acquainted with on the internet. My fishing partner also wanted to buy a new reel to match his Abu Garcia Veritas Rod for jig and frog fishing.

I was pleasantly surprised to see that there was plenty of parking and amazingly, it was free. That was nice not to have to unload 20 bucks right off the bat just to park. Also, the walk was not far from the parking lot to the event and we were not there that early so this was nice. Upon entering the convention center, there was plenty of room leading up to the ticket booths and I purchased my ticket in about 2 minutes from entering.

We walked the short distance to the show from the ticket booths and immediately noticed the size of the show. As we walked through there were plenty of booths with tackle and gear. From initial looks, reasonable prices as well. We made the decision to walk through the show and make notes of the booths we wanted to revisit to buy the stuff we came for.

My friend was in the market for a reel and we stopped by the Anglers Resource Booth and met Casey who was very friendly and knowledgeable about his products. They had a good deal but just did not have the brand my friend was looking for. If you purchased a reel 100 dollars or more, you would get an 80 rod for free. We talked for a while and moved on. We found another retailer The Anglers Outlet from Oak Forest and they had exactly what my friend was looking for. He was comparing the Abu Garcia Revo SX and STX. He ultimately decided on the Revo SX and the price was 25 dollars lower that that of Bass Pro. The guys at the booth were very nice and definitely helped in the decision.

I noticed while I was waiting in line with my friend to purchase his reel the guys from the Cast Crew just down a bit. I went down there to meet some of the guys. I talked a bit with them and they are cool for sure. I wanted to purchase a hat and shirt from them so I could represent this season. I talked with Jaypee and found out we had some of the same acquaintances and a common friend that we both used to fish with who is no longer with us. RIP Tony! We talked for a while and I did get the hat I wanted with the shirt. I also met Travis Crossman from Stankx Baits. I have been buying soft plastics from him for several years now so it was nice to put a face with the name. Ryan and Ray were also cool and we talked a bit about camera equipment and local lakes we have frequented. Great guys and check them out at Cast312.com. Their hats were very good quality as well as was the t-shirt. Was great to meet you guys and hope to see you out on the water this year. 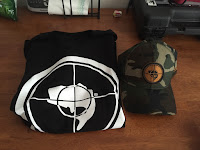 Back to business. I needed some new sunglasses and was looking for Strike King S11's. I could not find them anywhere at the show although I have to believe someone had them there because of the amount of retailers at the show. I did find the guys from Blue Fin Eyewear and liked the glasses they had on display. I tried them on and these were extremely comfortable and looked great. They were on sale for 25 dollars a pair which was very reasonable for this quality of glasses. Since we bought three pair, Steve gave them to us for 20 dollars a pair and they came with a lifetime guarantee. Great price! As we talked they were all the way from Louisiana. Great guys for sure and glad to meet them. 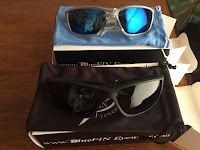 On the way out near the guys at BlueFin Eyewear I noticed Nick from Brookfield Angler. He was working the booth for Quest Watersports and I got a chance to say hi to him. Great guy and he has a great blog. Check him out at Brookfieldangler.com

Overall this show had a lot to offer in a relatively small package. There was a lot of tackle and gear for good show special prices and much better than the Rosemont Show. I highly recommend getting out and checking out this show before it ends tomorrow.
Posted by Unknown at 1:55 PM
Email ThisBlogThis!Share to TwitterShare to FacebookShare to Pinterest