Well, I have been fishing a lot lately and not taking my two pointers out for late season pheasant hunting or shed hunting. I did notice on my deer cams that the deer on the property I hunt still had all of their headgear on well into late March. This would be the reason that I had been shed hunting several times with none to show. Here are some pics of the bucks with headgear in late March. 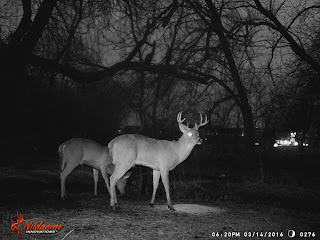 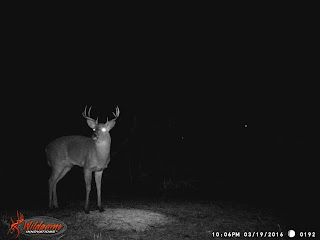 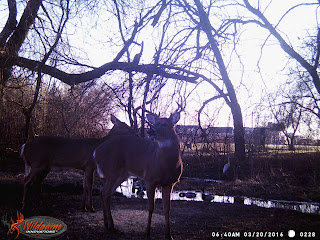 With the weather coming in I decided to take the dogs out for some shed hunting because the deer finally lost their racks and I thought maybe we will have some luck. As it turns out, we did. Both of my pointers found a single side of a rack which was pleasant because I was beginning to think they just had no interest in sheds. They both proved me wrong.

Was a cold morning and snowing at times quite heavily. We walked for about 4 miles and found these two antlers in the bushes. The amazing part was I never would have known they were there if the dogs had not found them. 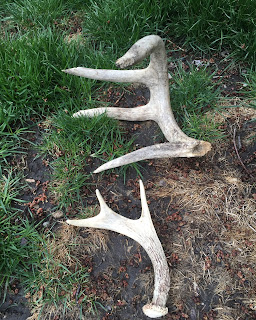 Dogs did great finding them and bringing them back to me so I know have the pointers trained to find songbirds, squirrels, rabbits, pheasants, quail, and sheds. Great feeling when both dogs got a set. Here is one rub of note because I have not seen too many like this one. This was an extremely large deer note the diameter of the tree. 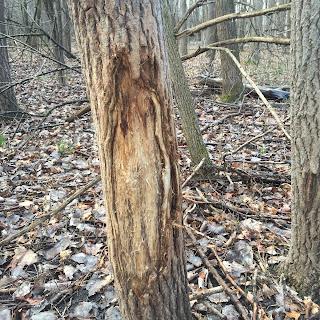 Great to be out in the woods with the dogs and have them working. They never cease to amaze me at their instincts when it comes to everything hunting.

Posted by Unknown at 5:12 PM
Email ThisBlogThis!Share to TwitterShare to FacebookShare to Pinterest