So a few weeks ago I had another near miss with a bass boat rig and it fell through. I started thinking to myself, am I ever going to actually find one. I got pretty discouraged and really stopped looking. I did see this boat but discounted it originally because of the year. I was looking for something in the 2002-04 range. My cousin who was in bassboatmania as well wound up going onto craigslist and sending me the listing the morning after I noticed it. I texted Jared and was surprised that the boat was still available because it looked very nice from the listing. I waited til after work and contacted Jared. We talked for a while about the boat and this is when I got a bit excited.

Jared indicated that the boat was garage kept for its life and was never outside unless it was fishing. Then came the part that got me really excited!!! The electronics!!! He indicated that up front was a Humminbird Helix 9 and on the console was a Helix 12 with SI/DI/Chirp/GPS. So we talked about the possibility of meeting up. Jared was down in Missouri by Table Rock Lake and I was now having money issues because the guy that did not sell me the other boat. I just did not have high hopes that this would work out due to the nice quality of this boat and what it had on it.

Soooooo..... I actually got my money from the bank which was another issue altogether because they actually did not have enough money in the bank. Yep, that's right, the bank did not have the money in cash for me to get but they worked on it for me and obtained the money the next day. So I get right on the phone with Jared and tell him to send some pics. The pics he sent were very good. There were a few places that needed repair or light wet sanding but all in all, this thing was pretty straight. After talking again and viewing the pics, I decided that this was the boat. Jared agreed to sell the boat and was a man of his word. Finally, someone that wanted to actually sell their boat. I made plans to meet him Friday morning in Missouri and take her out for a ride.

I made the trip down with my dad so that I was assured to have someone with me carrying so much money in cash. We made the trip Thursday night and stayed in Springfield Missouri. This put us within about an hour of Table Rock. The next morning we got up and finished the trip to Table Rock Lake. I called Jared and he was already out on the lake.

He came right in so that I could take her for a ride and man, this thing was fast. It planes out very quickly and once on plane, has tons of power left. I checked it out briefly and it was a done deal. I was very happy to have this boat. I took it back to the dock and we loaded her up. Jared and I took care of our business with the money and he gave me some last minute things about the boat. We hooked it up to the car and were off back to Mount Prospect.

Although since I have gotten it home there are some things that need attention. This boat is very clean!!! I am choosing to do a lot of repairs such as putting a new surge brake actuator on because he took the old one off, sanding the gel coat, three stepping the boat with Meguiars Three Step Process, and other minor things such as cleaning up the battery compartment. I am hoping that she will be ready to hit the water by this weekend after all repairs are done. I am happy to have it and she seems like a great rig. 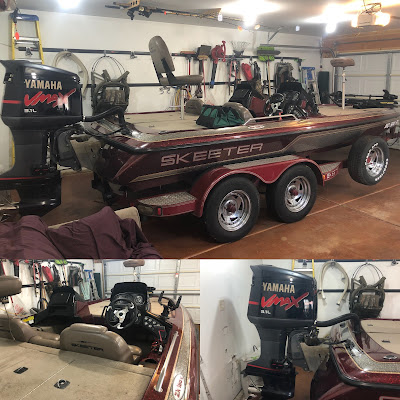 Posted by Unknown at 10:56 AM
Email ThisBlogThis!Share to TwitterShare to FacebookShare to Pinterest