I tied on the old red eye shad and was off to Beck Lake with my dog Tino in hopes to get the first legal fish of the season. I must say I did not have high hopes because of the weather this year but I was going to try anyway. I also had a KVD 1.5 in red craw. I pounded the water to no avail and then it happened. A leviathan from the first deep drop came up and smacked the red eye and took off on a tear. I must say that it felt great to have a fish on this season because it has been tough. I recently read a piece from bassinthemidwest.blogspot.com about using a square bill in shallow and it inspired me to get out. I would have thought this would have been the ticket today with the warm sunny temps however, the fish was on the end of a long cast toward the drop off.

I was running the red eye at medium speed and just keeping it out of the junk as the lure approached the shore. As I fought the fish I knew he was not a giant but just wanted to get the fish to the bank for my first legal of the year. Well I got him up and my dog was extremely interested in the fish. He stayed right by me as I took the pic of the fish and then seemed to be completely befuddled on where the fish went when I released it. This was really funny to see his reaction. Well nothing special but to me it was a great fish and I finally have the skunk of my back this year. 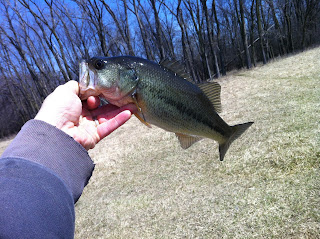 Posted by Unknown at 5:37 PM
Email ThisBlogThis!Share to TwitterShare to FacebookShare to Pinterest