Several weeks ago my Mac Book Pro started experiencing some issues with speed and functionality and I knew the end was near. I started looking into another Mac Book because I really liked the way it performed however, I quickly found that the new Mac Book's were very overpriced for what you get in my opinion. The editing software for the Mac, Final Cut Pro was also an easy and comprehensive editing suite that was ideal for my productions. I went ahead and priced out a new Mac Book and just could not believe that it came in at 5400.00 dollars. That was the 15.6 Retina Display and I really wanted a 17 inch so I began looking into other options.

I did some research on my own and consulted with a friend that I trust and is knowledgeable with information technology and it was apparent that a PC would be the way to go. I gave him a list of specifications and the main use that I would be needing for this new machine and he got to work researching and I continued my search. We both agreed that MSI made some very good machines that would work for my applications. Most notably they came in around 1500-1700 for the models that I was going to be looking at. After some deliberation, I settled on the MSI brand and began to dig into the specifications of the Machine that would eventually be purchased.

When all was said and done I settled on the MSI GT-72 6QD Dominator. This was the low end of the Dominator line but had everything that I wanted and more. Even though this was a laptop, I feel strongly that it could keep up with any desk top out there.

Firstly, upon unboxing I noticed the size of the machine. The dimensions are: 428(W) x 294(D) x 48(H)mm. It is not a small package at all but size was not an issue and I wanted the larger display for a more satisfying editing experience. This finish is Matte Black and looks like the finish of a dragster. The only issue with the finish is that fingerprints collect easily and are plainly visible. Minor problem but if you like aesthetics, can be bothersome. The display is a 17.3" Full HD (1920x1080), G-SYNC ready with 75Hz, IPS level panel that is extremely vibrant. I have used it for several weeks and I can say the display is clear and editing video is satisfying. I can also connect to my Samsung 60 inch smart tv through the HDMI out but more on that later. 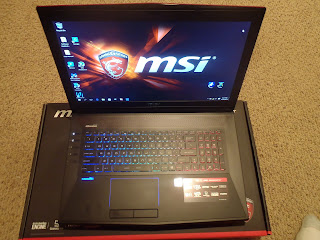 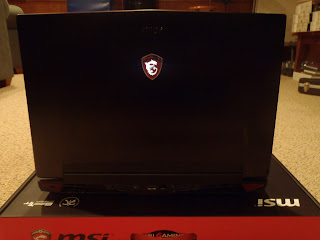 Enough of the eyecandy that this machine has; lets get into the hardware that makes this notebook really shine. The GT-72 6QD comes equipped with the new 6th generation Intel processor. This processor requires lower power consumption and delivers better performance than previous generations of Intel Chipsets. CPU performance of The Core i7-6700HQ is 20% faster than the i7-4720HQ under average usage. For GT series with the Core i7-6820HK model, CPU frequency can be stretched from 3.7GHz to over 4GHz and CPU performance increases 30% compared with that of i7-4720HQ. This is evident once the video is downloaded and editing has begun. Whereas my Mac Book was choppy, this machine is smooth when playing back video and inserting effects such as transitions and titles. Overclocking is easy as well with shift technology. Simply put this is a utility that allows overclocking with three different levels. This can be viewed in and managed by the MSI Gaming Center Utility. The three levels are: green, comfort, and sport. Green modifies power consumption of both CPU and GPU to the lowest while maintaining coolest constant system temperature for both. Comfort maximizes power consumption of both CPU and GPU to leverage full performance of both while maintaining system temperature. Finally, sport overclocks CPU core clock up to 30% (from 3.7GHz over 4GHz) to push the system to extreme.

As far as the video performance the 6QD comes with the Nvidia GeForce GTX970M with 3GB of GDDR5 Ram. One of the most notable features is G-Sync which is a revolutionary technology that eliminates screen tearing while also reducing input lag. The result is the smoothest, fastest, and most responsive video experience. I have found this video card handles my video editing without a hitch. Since this is a gaming notebook, my video productions are not a problem for it to handle and create smooth final products. I forgot to mention the fan boost and this is a nice tool to keep the box cool when overclocking and working on highly resource consuming projects. It can be accessed from the front left of the keyboard. A button press kicks both fans into overdrive and I have seen the temps of the GPU and CPU decrease 7-10 degrees. More of a gaming issue but I have kicked on the fans to cool the box several times and it seems to work well.

As far as Ram goes, she has 16GB of DDR 4 2133 and this seems to be very capable of handling my video needs. I have yet to see any glitches in my video editing and when watching video, this machine is as smooth as can be. Coupled with the 1TB 7200 RPM hard drive I have plenty of storage for my video projects. I did not get the optional SSD drive but the nice part is that it is set up for it and I can get one to install at a later date if I wish too.

One of the things I also like about this machine is how many USB ports are on the case. On the left side of the case there are four USB 3.0 inputs along with headphone I/O and line in and line out and an SD card reader. The right side of the case houses the optical drive which is a Blue ray burner/player as well as two more USB 3.0 inputs. For me, this was a positive because I have four cameras that I charge and with this machine, I can charge all four at once which cuts down on time. On the back of the case is the HDMI(V1.4) out, USB 3.1C input, the A/C charge input and finally, the lan connection. 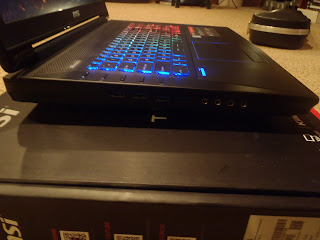 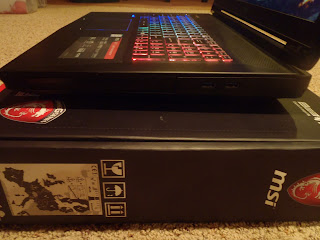 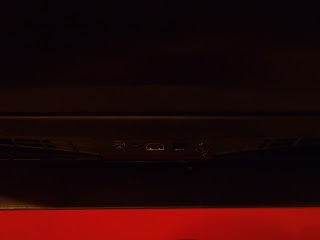 The keyboard is a steel series and seems to be functional and solid. It has a back lit design and the color of the keyboard is fully customizable and adds to the cool look of this machine.

The machine comes pre-loaded with Windows 10. I do like the way the it runs but I did find out rather quickly that some of my editing software was not compatible with it such as Avid Studio and Pinnacle Studio. Minor issue and for now I did find a program the would work with Windows 10 and that was Filmora.

Overall, I do like the functions of the machine and I have not been disappointed since defecting back to the PC world from The Mac World. When I priced a compatible Mac the price was more than triple. I do have to say that I like the Mac OS compared to Windows, however, I could not justify the price for The Mac. As I said, I have used the machine for several weeks and do like it. So far it has been great for what I am using it for and it meets exactly what I wanted. A machine to edit video and remain smooth even when editing HD and now 4k video. I tried to list the features that stood out to me and why I like this machine. I would recommend this to someone looking to get a new computer if size was not a factor. If size is a factor, I think another machine would be appropriate.

Size (Large Dimensions)
Fingerprint magnet and if you don't like seeing them, you will be cleaning a lot
Heavy
Windows 10 is not compatible with some software although I suspect this will get better

Well, that is my overview of this notebook and I am impressed with the funtionality and features of this machine. I hope this helps if you are looking into a new notebook and if you have any questions just comment and I will do my best to answer anything I may have missed in the review.

Posted by Unknown at 10:38 PM
Email ThisBlogThis!Share to TwitterShare to FacebookShare to Pinterest
Labels: Gear Reviews